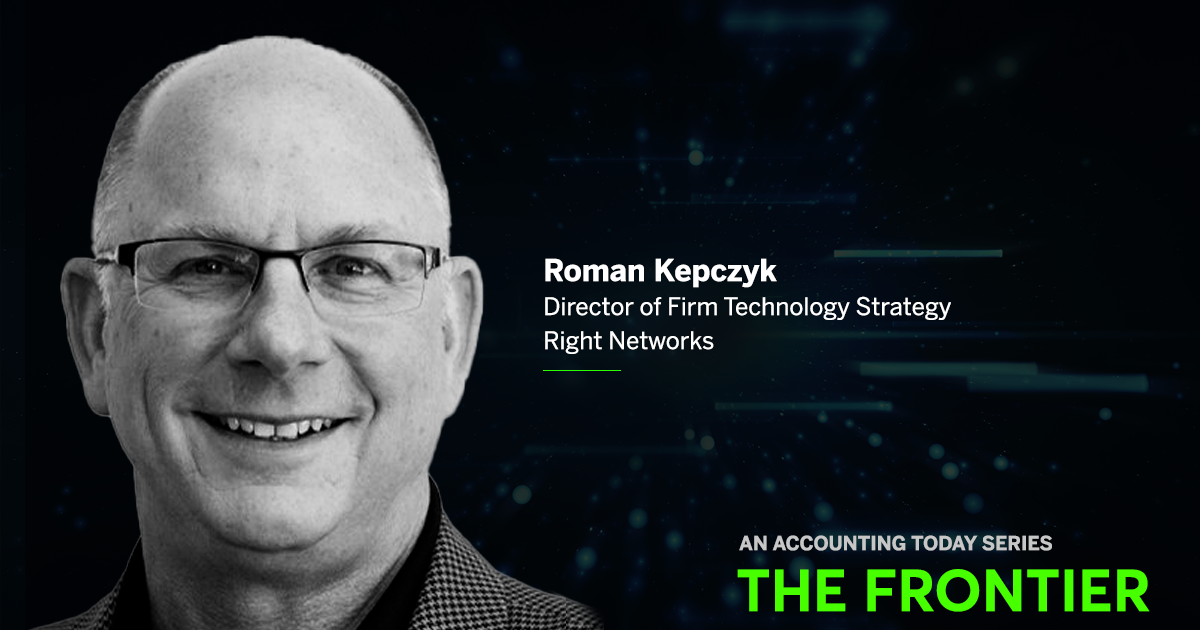 Roman Kepczyk, director of firm technology strategy for Right Networks, is very excited about the new ways businesses are leveraging bots and other tools typically associated with artificial intelligence, but with the caveat that these programs are only as smart as the people who make them.

Today, even small businesses today can now employ very advanced analytics tools that can actually get smarter as they become more accustomed to their users, according to Kepczyk. These tools allow companies to pull data in real time and find actionable insights, many times aided by bots. While these automated processes have been around for a while, he said the last two or three years have seen a major acceleration in their use.

This represents a major shift in the tools accountants use on the job, particularly Microsoft Excel. While accountants have used this program for generations, the latest business intelligence tools are better suited to the needs of today’s business.

“Excel is the accountant’s hammer. When it came out we used it for everything. But now we have these analytics tools, which do amazing graphics and analyses and go way beyond the pivot table and sampling stuff we knew all along. It gives accountants, particularly young ones out of school, tools that make them much more valuable,” he said.

While some vendors might play up the AI aspects of these programs, Kepczyk said it’s more accurate to think of them more in terms of “augmented intelligence.” The bots, he said, do a lot. They can collect the data and even sort it with some degree of intelligence, like seeing a receipt for a gas station and charging it as a fuel cost. Still, he said, they generally are bound by an “if this, then that” model that, while convenient in many cases, remains inextricably bound to human inputs.

“I’ll call it more augmented intelligence as opposed to artificial intelligence. What we’re seeing is those bots are capturing part of it, but data analytics tools like Tablet or Microsoft Power BI can create dashboards and connect to a general ledger and take that data to create a visual representation in either real time or near real-time,” he said, adding that most accounting today, in contrast, is backwards-looking, with reports produced after the fact.

Whether they’re artificial or augmented intelligence, Kepczyk believes these programs will have a major impact on the profession, akin to when accountants began widely adopting computers in the first place, which enabled firms to start shifting, slowly, from the paper-and-pen model.

But their impact will depend mainly on the people who program them. Like a person, an AI program only knows what it’s been taught, and just like a person, if they’re not taught right, then they will not be very effective. This is especially so given that many of them are taught to look at past events for what to do in the present.

He pointed to trading bots as an example we can see right now. Today bots do the majority of trading on securities and commodities markets, as they are capable of speeds far beyond any human. However, their widespread use has also given us flash crashes — market disruptions caused by bot activity, usually the result of their programming getting caught in negative feedback loops. Kepczyk said these bots can show both the promise of AI as well as its potential drawbacks.

“What I’m most concerned about, honestly, is AI. So much artificial intelligence is based on prior history and other examples. They can be programmed for good or for bad. When it’s bad it can be really bad,” he said.

This story is part of an Accounting Today series called “The Frontier,” where we explore the cutting edge of accounting technology through conversations with thought leaders across the country, who will share with us their observations, hopes, concerns and even a few predictions here and there. We’ll see you at the Frontier.

See the rest of the series here.

Australia’s Tax and Benefit System Might Deter Working Parents from Advancing in Their Careers
Top Stock Picks for Week of August 1, 2022
Mercado Libre Surges After A Big Earnings Beat
New CalCPA chairs plan to focus on diversity, education in accounting
Use of credit cards, personal loans surges, but ‘it’s not a red flag,’ expert says