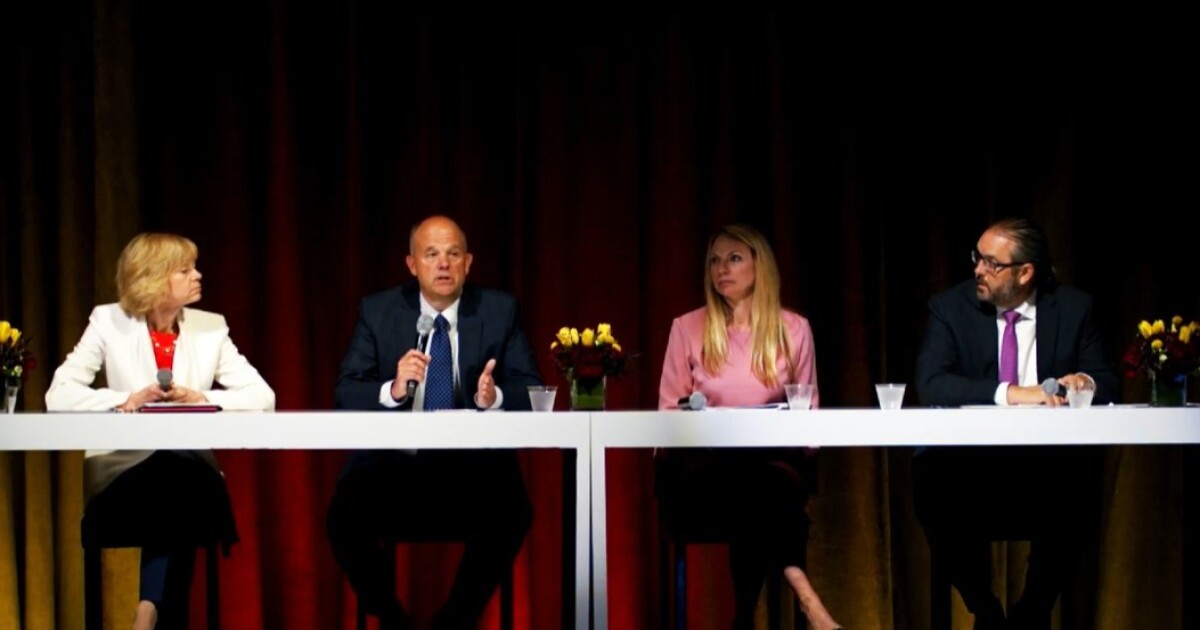 The Financial Accounting Standards Board is making plans for its future projects, including digital assets, intangibles, government grants, and accounting for financial instruments with environmental, social and governance-linked features and regulatory credits.

FASB’s parent organization, the Financial Accounting Foundation, released an annual report Wednesday on the work of both FASB and its sister organization, the Governmental Accounting Standards Board. FASB chair Richard Jones and other officials from FASB and the Securities and Exchange Commission discussed some of those upcoming standards Thursday during a conference hosted by the University of Southern California’s Leventhal School of Accounting.

FASB currently has approximately 20 projects on its agenda and some are nearing completion. “Some of the standards you’ll see us issuing in the near term include a disclosure standard related to supplier financing,” said Jones. “That’s something that we heard intense interest from investors wanting to understand those programs and the effects on the company’s liquidity. You’ll see that coming out this summer. You’ll also shortly see a final standard issued on restrictions and their effect on the valuation of equity securities. That’s something where there was diversity in practice throughout the financial reporting community and the standard will narrow some of that diversity in practice.”

Later this year, FASB is planning to issue an exposure draft on its long-running segment project, where the board is responding to requests from investors for more detailed information on the costs that make up the segment profitability that the chief operating decision maker is using at a business.

FASB is also doing post-implementation reviews of how well some of its recent major standards worked.

FASB added several new projects to its agenda, including ones related to ESG and digital assets such as cryptocurrency after issuing an invitation to comment last year to its stakeholders (see story). The SEC reviewed the feedback received by FASB and is encouraging the board to take on climate-related standards, as the SEC has been doing of late with its own proposals.

“We highlighted three particular areas where we thought accounting standard focus could be spent,” said Kevin Vaughn, senior associate chief accountant at the SEC’s Office of the Chief Accountant. “That’s disaggregation of the income statement, climate-related transactions and digital assets. I don’t think there’s any disagreement in terms of those being significant areas of feedback, and I think we’ve certainly already seen some of the activity happening and look forward to progress on those.”

FASB issued an education paper that discussed that issue about six months later, but in response to its agenda consultation it was asked to get more involved in several ESG areas, including environmental credits, such as carbon exchange and blended fuel credits. “We didn’t have a specific accounting standard that talked through those different regimes and how to deal with them, and our board recently made a decision to add that project to our agenda,” said Jones. “You’ll see us develop an accounting standard as it relates to those items. That’s an area that while some companies may not have significant or material amounts of those today, it’s a trend we see building, and we thought it made sense to get out ahead of this from a standard-setting perspective.”

Stakeholders also indicated interest in the accounting for ESG-linked financial instruments. “It might be that a company has borrowed money, and depending on their hiring goals or their emissions, they pay a different interest rate depending on whether they hit a goal or not,” said Jones. “What would be the best accounting for that? Is it really an embedded derivative accounting model, which some say may be appropriate today, or is it really more along the lines, as we heard from many investors, they would really like to understand what management really thinks is going to happen and the progress they’re making toward achieving those goals to better understand the financial risks. That’s something that’s still on our research agenda.”

The FASB staff will be coming back with more information for the board to see if there’s an achievable path to standard-setting on that project.

In terms of the new project on disaggregation of the income statement, investors are looking for more information about expenses. “The investors were clamoring for additional detail where they could see trends and make their own analysis of what is happening with the expenses,” said Jones.

Investors are also looking for additional details on income taxes to understand the complex tax planning and tax position a company is taking. “In other words, how are worldwide operations affecting their effective tax rate,” said Jones. “We’ve repositioned that project to focus on effective tax rate reconciliation. It’s one of the most useful tools for someone to use in understanding the tax position of a company. It’s not necessarily presented the exact same way when you go from company to company, and there are certain categories where there’s not a lot of detail about them.”

FASB also removed some projects from its agenda, including one on liabilities and equity and another on reorganizing its consolidation guidance, but decided its priorities were best spent on other initiatives.

FASB heard overwhelming demand from its stakeholders for a project on digital assets as more companies have gotten involved in the cryptocurrency area. “The single topic that drew the largest amount of responses was the accounting for digital assets,” said Jones. “I do think a lot of those responses were driven by a pretty high-profile tweet, so it’s probably the only time the FASB has ever trended on social media. But the feedback was very consistent, though. It was focused mostly on cryptocurrency and certain higher-profile cryptocurrencies and it was really asking if the indefinite-lived intangible model, which is what it falls into today, was that the best accounting model. I think it’s fair to say that model certainly wasn’t designed for something like Bitcoin. It was designed with very different assets in mind.”

It wasn’t clear which tweet he meant, but MicroStrategy CEO Michael Saylor did welcome FASB’s decision to add the project in a tweet in May, and Rep. Michael Emmer, R-Minnesota, a member of the House Financial Services Committee, urged SEC chair Gary Gensler last October to push FASB to prioritize crypto accounting standards.

In December, as the responses poured in to FASB’s invitation to comment, the board added a project on digital assets and exchange-traded commodities to its research agenda. “Part of the reason for doing that was there seemed to be some similarities and some differences when you think about certain precious metals and the way they trade and the reason people may invest in those,” said Jones. “Was there an overlap there? Would there possibly be one model that would make sense for multiple types of assets, not just this subset of digital assets? We brought the results of that research back to our board. When our board looked at it, ultimately the majority of our board decided that while maybe at some point in time we should be looking at the accounting for some of those exchange-traded commodities, focusing on those digital assets really made the most sense, so we added it to our agenda.”

How to Protect Your Money During Inflation
IMA steps up ethics training during pandemic
AICPA weighs in on Inflation Reduction Act
Clearwater Paper (CLW) and Logitech (LOGI): 8/8/2022 Bull & Bear
With domestic fares down 25% since spring, now’s the time to book flights for fall trips, travel app study finds