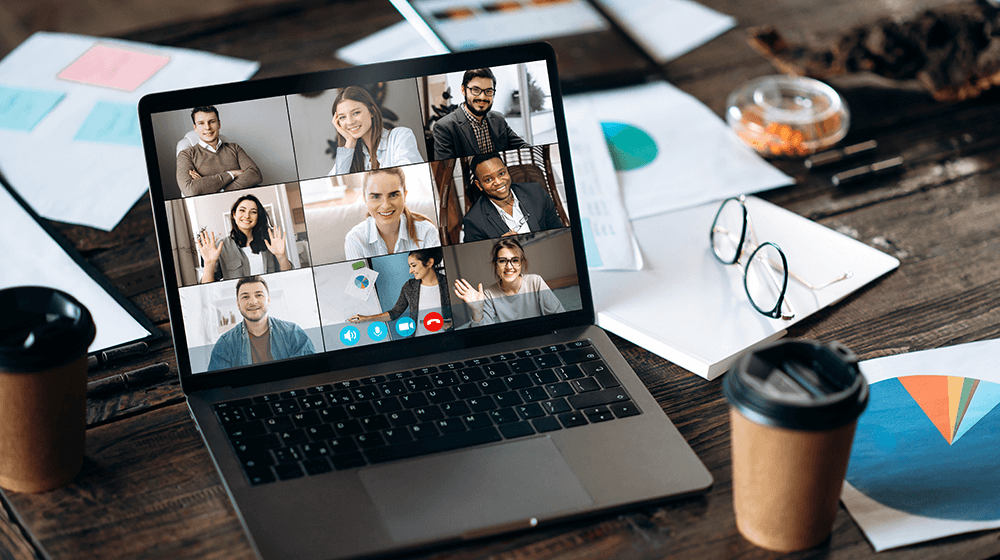 If you buy something through our links, we may earn money from our affiliate partners. Learn more.

Who doesn’t love a Zoom meeting? You can sleep in, show up to work in your boxers and most importantly avoid a lot of unwanted germs. Professionals around the world got used to Zoom meetings in 2020, and they’ve now become part of the modern workplace. But all that video calling has also led to plenty of hilarious Zoom fails.

Whether knee-slapping or cringe-worthy, we can’t help but appreciate some of the funniest Zoom fails to be shared on the web. Some Zoom meeting fails were shared via social media, while others were so hilarious they made headlines. Prepare to bust a gut as you watch these funny Zoom conference calls.

“At least he’s not a cat.”
During a House Financial Services call,
Congressman Tom Emmer had some trouble today.
Rep. Maxine Waters: “Mr. Emmer? Are you okay?” https://t.co/IWvU2bZISm 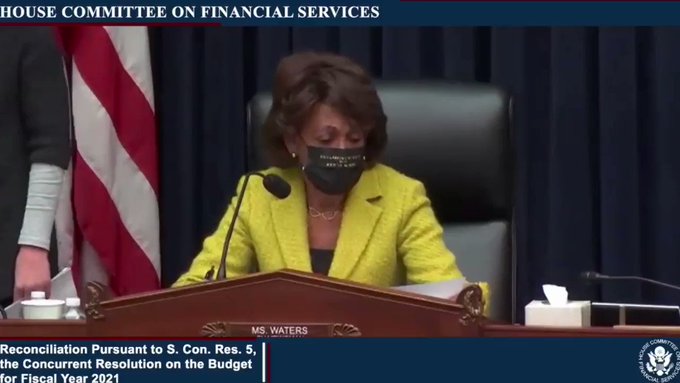 Congressman Tom Emmer encountered a little trouble during a House Financial Services call, appearing upside down. The representative apparently didn’t know how to fix his camera angle, and plenty of laughter ensued.

2. When a Video Conference Takes an Unexpected Turn

During one awkward video call, a team member apparently failed to realize he was still recording, much to the amusement of his co-workers. Unfortunately, he is far from the only Zoom fail to feature a lack of pants.

3. What’s a Zoom Meeting Without Some Underpants? 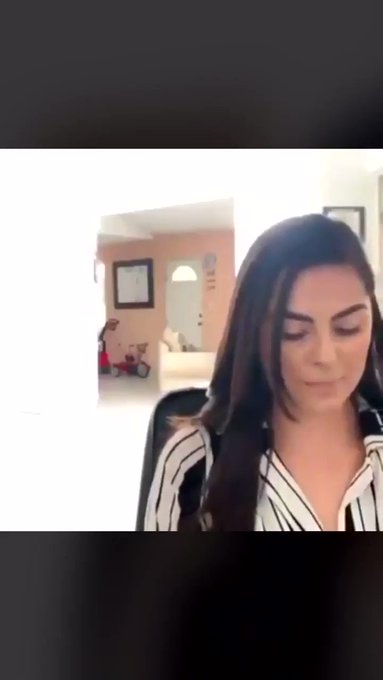 We’ve all seen a hilarious Zoom fail where someone can’t seem to master their mute controls. We surely can relate to this clever cartoon from Small Business Trends that captures what we’ve all wanted to say.

5. Try to Keep a Straight Face While Talking to a Potato

my boss turned herself into a potato on our Microsoft teams meeting and can’t figure out how to turn the setting off, so she was just stuck like this the entire meeting https://t.co/uHLgJUOsXk 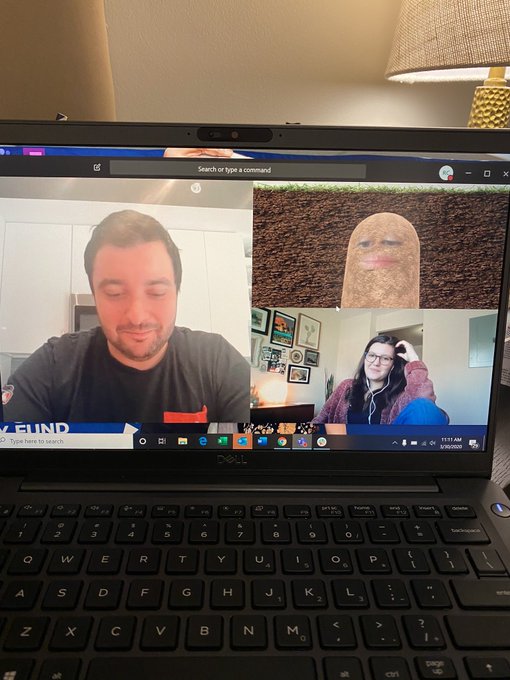 It’s hard to imagine what this team was thinking when the boss got caught behind an unintended filter. How do you keep a straight face when talking to a potato boss?

6. Always Expect the Unexpected in a Zoom Call 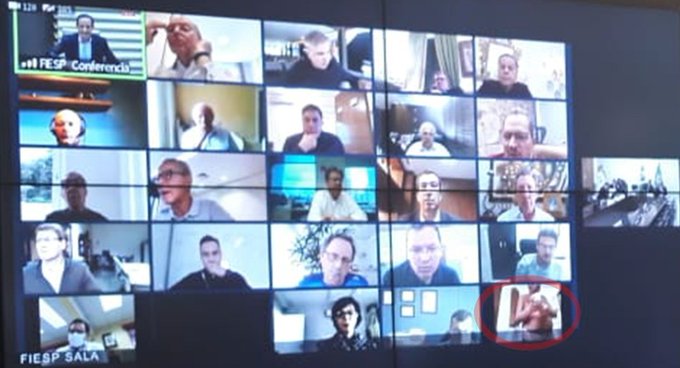 There are almost no words for some Zoom fails. What could some people be thinking when attending a large video conference call from the shower? We can only imagine the horror – and hilarity – his teammates must have felt.

7. The News Stops For Nothing… Except Maybe Some Kids

The news stops for nothing, definitely not a pandemic. It might, however, pause, for some cute kids when the broadcast is conducted via Zoom. Pay no mind to the horrified mother!

8. Coworkers Saw More Than They Bargained For In This Virtual Meeting

When attending a virtual meeting, always assume your camera is turned on! A professional named Jennifer learned the hard way during this Zoom fail, when she inadvertently broadcast herself taking a meeting in the bathroom, much to the surprise of her colleagues.

9. Who Can Forget the Hilarious Lawyer-Turned-Cat?

One lawyer went viral for all the wrong reasons with his Zoom filter mishap. Instead of his professional accomplishments, Rod Ponton will forever be associated with, “I am not a cat.”

10. Then There are the People Who Wish They Had Used ‘Mute’

Sometimes the funniest part of watching a Zoom fail is seeing the expressions on the other attendees’ faces as they experience the faux pas. In this Zoom online class fail, one student makes the NSFW mistake of forgetting to mute her device… or was it a mistake?

11. We Wonder How Long It Took the Teacher to Notice 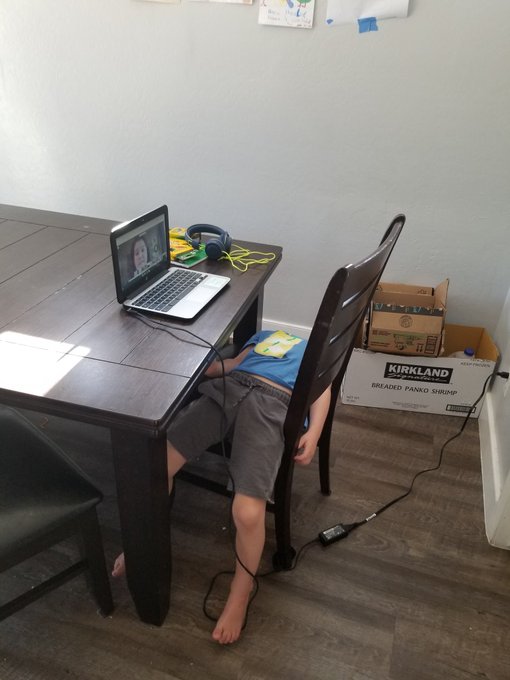 Who hasn’t wanted to be like this kid and fall asleep while stuck on a boring Zoom meeting for hours on end? And who hasn’t wondered how many people aren’t really out there sleeping in Zoomland while their video is turned off? We’ve all had our share of Zoom fatigue, after all!

12. When Your Pet Makes a Cameo Appearance

Even the most serious viewer couldn’t help but crack a smile when a furry friend interrupted one Zoom broadcast. Thanks to Rocco and his tail, the message went viral.

Either there’s a serious glitch in the Matrix that somebody needs to check out, or this guy was way too reliant on his virtual background. Just where exactly was he broadcasting from?

14. Don’t Forget to Wear Pants to Your Zoom Meeting

And in yet another case of someone who didn’t realize they were recording, we see what practically everyone was wearing on their bottom half for Zoom calls last year. Hopefully, most of us didn’t get up and walk around with the camera running.

15. Or At Least Remain Seated While Filming

This professional really thought his camera was off, and we can’t help but cringe at his utter embarrassment when he realized his mistake. Better play it safe and wear pants next time, buddy!

16. When Lying About Your Sick Grandmother, Remember to Properly Mute

Possibly more embarrassing than being caught with your pants off is being caught lying about your sick grandmother. In this Zoom fail another professional wishes he had double-checked his mute setting before taking that phone call.

In a now-viral Zoom meeting of the Handforth Parish Council’s Planning and Environment Committee, council member Jackie Weaver tries to gain control as other members argue that she has no authority to do so. Madness and chaos ensued, and the results were a hilarious Zoom fail.

While professionals have to deal with distractions from kids and even pets during Zoom meetings, students must overcome distractions from parents. In this case, however, overcoming the destruction became a hilarious distraction all itself.

19. And He Didn’t Even Wash His Hands

How many of us have sat in a Zoom meeting only to suddenly hear a mysterious, “flush,” from a random user? It’s hard not to laugh. But how often can you see exactly who was doing the flushing and realize they had been speaking from the toilet?

Of all the hilarious Zoom fails, it’s hard to beat the antics of a child giving her professional mother bunny ears in the classic schoolyard style. No matter how many times you watch, this cute prank will crack you up every time.

Zoom meetings can be a real drag, so it’s no wonder why this unexpected guest brought such smiles to the faces of these professionals during their conference call. We’d call this a Zoom fail, but it’s just too sweet.

22. Please, for the Love of All That’s Holy, Use Your ‘Mute’ Button

Will people ever learn to use their ‘mute’ settings while in a Zoom meeting? The random toilet flush became so common that videos were made poking fun at the phenomenon and reminding people to take advantage of their technology.

23. He Thinks He’s Fooling His Colleagues with His Virtual Background

In case anyone missed the memo, don’t rely on a virtual background. When it fails, it can create some really embarrassing and awkward Zoom meeting fails. In this Zoom fail, an Ohio legislator thought he was fooling everyone on a Zoom call, using an office background, but it was obvious he was driving around in his car.

Not every Zoom call is caught on video. Plenty of Zoom meeting fails have been recorded for posterity on social media, as people have recounted in writing their tales of hilarious mistakes, oversights and coincidences for all of the world to enjoy.

24. At Least the Boss Had a Sense of Humor

I accidentally burped a wallshaking loud burp during a meeting today. The boss responded with a louder one. I was impressed with her #zoom #zoomfails #wfh #workfromhome

Even when someone is skilled with their mute button, sometimes something happens unexpectedly, and embarrassing moments occur. Thank goodness for understanding bosses and colleagues as we all adjusted to Zoom meetings.

25. An Accidental Case of Too Much Information

While there are some perks to attending work and school via Zoom, there’s also the risk of an invasion of privacy as we invite classmates and colleagues into our home offices. Hopefully this professor’s students had some respect.

26. At Least Students Are Paying Attention to Something

Private Message on Zoom while teaching class today:
“This is weird but I think your dog just vomited on the rug behind you.”

We can only control so much of what appears in our Zoom meetings, especially in the days before virtual backgrounds were readily available. At least this teacher knew the students were paying attention to their computer screens.

27. An Unintended Consequence of Shared Workspaces

One mom had an unexpected Zoom fail when her daughter logged on to her Zoom dance class. Apparently, the family shared the same account… and the same user name.

28. At Least the Meeting was Entertained

@catherinewcai While waiting “muted” to begin my Physiology class lecture, I had a very impassioned discussion with my son about Who Wins? Kong or Godzilla? Foul language was involved. I clicked over to Zoom to see the entire class had entered their votes in the chat.

And in yet another hilarious ‘mute’ fail, one mom entertained the entire meeting with an impassioned debate over one of life’s greatest questions. Will people ever learn how to use their mute controls?

How to Avoid Being Part of Your Own Zoom Meeting Fails

Zoom meetings have become a normal part of the modern professional workplace. Some love it, others hate it, and we all better get used to it. Want to avoid your own Zoom meeting fails? Consider the following tips to improve your Zoom meeting experience:

Qualify for discounts, special offers and more with a Business Prime account from Amazon. You can create a FREE account to get started today.