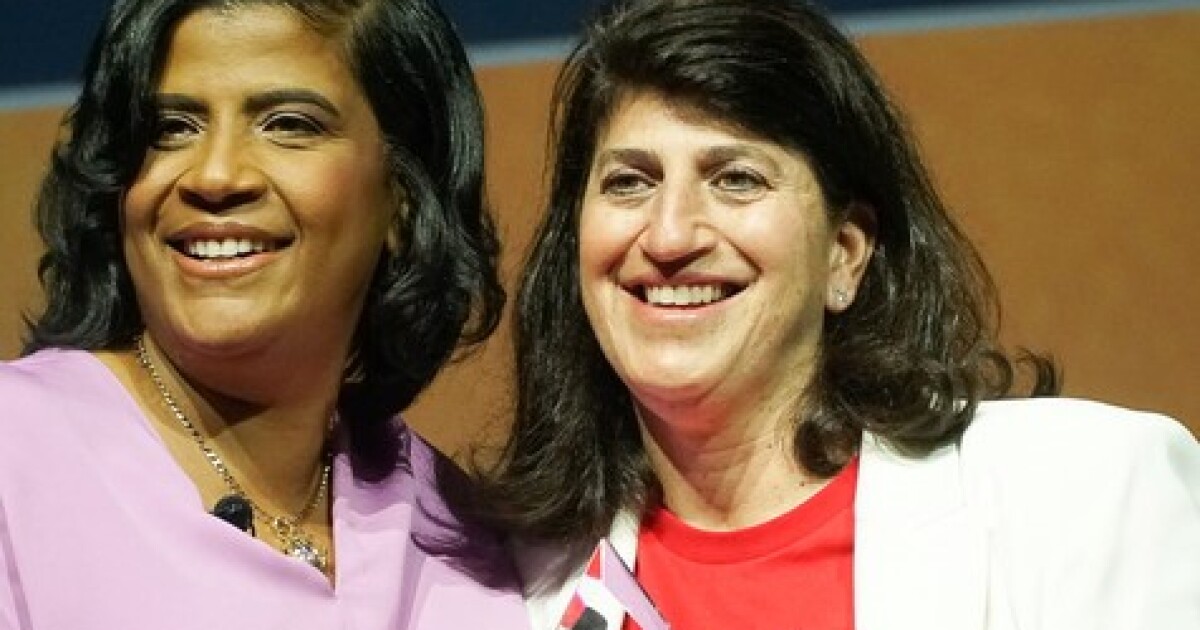 This is only one in a series of actions CPA firms must take, she emphasized, speaking in an interview with Deloitte audit CEO Lara Abrash after Saint Juste presented her with NABA’s CEO of the Year Award during the convention’s opening plenary. Deloitte, along with CliftonLarsonAllen, the Center for Audit Quality, and Financial Executives International, was a corporate sponsor of the event. (Read more about CLA’s newly announced grant to NABA.)

Firms need to establish an intentional strategy to finally make progress on diversity, equity and inclusion, Saint Juste said, in a profession where less than 0.5% of CPA firm partners are Black.

“This is an issue we have to figure out ⁠— we have to think about this and move the needle,” said Saint Juste, explaining this was a large topic of discussion over the four-day convention that this year had a theme of “recharge” as the world emerges from the pandemic. “Lara is a white leader who doesn’t try to explain, she just acknowledges this is the data. And we have other leaders modeling that.”

NABA honored Abrash with the association’s annual award recognizing leadership excellence for operating with this kind of intentionality, explained Saint Juste, as well as having the humility to recognize when there is more to be learned on a topic as important as DE&I before immediately having all the answers.

“Like anything in business, you need a strategy, and to have a strategy around diversity, equity and inclusion,” Abrash said. “You look at the representation of Black professional CPAs, and it’s horrifically low relative to the population at large. Every year, there are north of a thousand eligible [Black students] coming out of colleges and universities, but there are not enough to create a vibrant profession.”

This led to Deloitte establishing its Making Accounting Diverse and Equitable (MADE) commitment in June 2021, contributing $75 million toward increasing ethnic and racial diversity at not only the Big Four firm but the profession at large. The commitment is focused on implementing various programs and strategies to reduce the barriers to a more diverse profession, and includes the Deloitte Foundation Accounting Scholars program, which will fund $30 million in scholarships over the next six years to students pursuing a fifth-year master’s program in partnership with select universities with a mutual desire to increase diversity in master’s programs.

In conjunction with this, Deloitte released a 2021 “Diversity, Equity, and Inclusion Transparency Report” which revealed, in alignment with professionwide data, a long way to go in achieving more equal ethnic and racial representation. In outlining its goals to achieve this through the MADE commitment, Abrash acknowledged Deloitte has set out on an “ambitious plan that we recognize takes time.”

“The hardest part of a diversity, equity and inclusion strategy is creating a culture of inclusivity, and our leaders are focused on this,” Abrash said. “We are making sure, in the large and small moments, every person in the organization can be their authentic selves, and if we do that, it’s a place they are going to want to be. We talk about it, about creating uncomfortable moments, and acknowledge we need to do better. There are also barriers to who and where we are hiring. Are we creating outcomes that are a self-fulfilling prophecy?… We can’t measure successes in a day, but over the next five to 10 years.”

Abrash and Saint Juste agreed that the fifth year of accounting education can be one of the most crucial barriers for prospective Black CPAs, which is why MADE is offering scholarships to these master’s students, but why alternatives to this traditional CPA path should also be explored.

“The fifth year is a burden for professionals,” said Saint Juste. “There are diverging views if it should be a requirement. As CEO of NABA, I don’t think it should be. Black professionals have enough burdens to overcome … Stakeholders have different reasons to say if it matters or not, but we should start looking at apprenticeships, getting people into the profession … or work experience translating into credits.”

While MADE was created to help with the financial aspect of this specific burden, Abrash agreed that a wider range of education opportunities are necessary to reach these underrepresented communities ⁠— and the population at large that recent data reveals is veering from this traditional career path and even the profession entirely.

“The trends go beyond just this group of Black professionals,” she acknowledged. “The trend of people getting their CPAs is down. We’re generally seeing megatrends of less people attending four-year colleges, less at five-year colleges. And we are looking to hire people from all walks of life. There are a lot of things we are doing that you don’t need four or five years [of college for]. The five-year cost and CPA cost, the two together, you are talking about a $100,000 to $150,000 investment …. It’s a real issue and its hyper-pronounced when you talk about these communities ⁠— it’s a nonstarter. There are other ways to create capabilities; apprenticeship models, other ways to continue learning. It’s an issue that needs to be resolved.”

In May, NABA announced it had partnered with CAQ, with support from Deloitte and CliftonLarsonAllen, to address the pipeline problem with its Pathway to College program, created to support Black high school, community college, and Historically Black College and University students’ entry into the accounting and advisory profession.

“HBCUs make up approximately 3% of the institutions of higher education in the United States, yet they graduate nearly 20% of Black professionals,” Saint Juste stated in the announcement. “NABA’s current work to build educational pathways that assist Black students in transitioning from high school and community college to HBCUs through articulated agreements is a critical component of building diverse and robust accounting, business and financial talent pipelines.”

For firms looking to improve their DE&I efforts that don’t have the resources of a Big Four or Top 10 firm, Abrash recommended crunching the numbers and then being transparent about the results and the goals of the firm.

“We had an honest assessment of where we are as an organization, what our ambitions are, and to be intentional about those, with a lot of effort, and to know we will not have all the answers in the beginning,” Abrash explained. “You have to bring people along with you. And you have to start somewhere.”

For the Black professionals NABA and Deloitte are aiming to recruit and retain in accounting, events like NABA’s convention can be an important “space of belonging,” Saint Juste said, where attendees can start to see more diverse representation in the roles they might aspire to one day.

“They can get excited about the profession ⁠— there is this idea of a community of belonging, where they can look across and see themselves,” she shared. “See Black partners leading major initiatives ⁠— these are moments you don’t see everyday. This idea of making a more just world is intentional, but we don’t do this alone. Moments [like the convention’s opening plenary] where you see a Black CEO and a white CEO; it’s meaningful to say we’re in this together. This is what a more just world looks like, and there’s an idea of hope.”