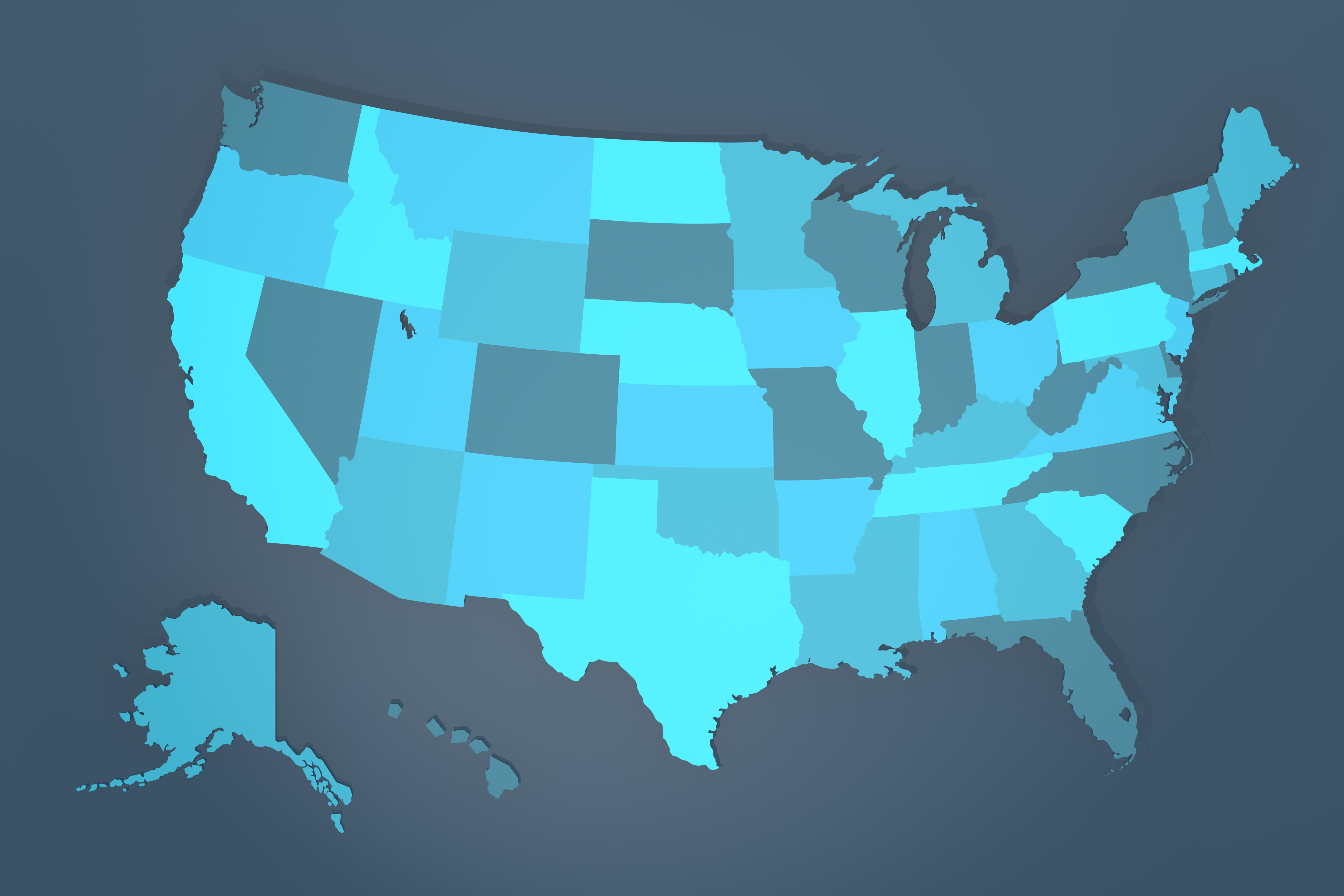 Among the 46 states that held legislative sessions this year, structural state tax reform and temporary state tax relief measures were recurring themes. With most states’ sessions now complete, individual income tax rate reductions have been enacted in 10 states: Georgia, Idaho, Indiana, Iowa, Kentucky, Mississippi, Nebraska, New York, South Carolina, and Utah. A ballot measure that could lower the individual income tax rate in Colorado is scheduled to be voted on in November, and there is still the possibility that Oklahoma or other states could enact income tax rate reductions in a future special session.

Under HF 2317, the Hawkeye State will transition from a graduated individual income tax structure to a flat rate system by 2026. The current nine-bracket system will be consolidated to four brackets in 2023, and the top rate will decrease from 8.53 percent to 6.5 percent. There will be three brackets in 2024 and two brackets in 2025 with top rates of 5.70 percent and 4.82 percent, respectively. By 2026, the lone rate for all taxable income will be 3.9 percent. HF 2317 also exempts retirement income and some farm rental income from taxation.

Effective this tax year, S1087 lowered the state’s top marginal rate from 7 percent to 6.5 percent, and the state’s previous six individual income tax brackets will collapse into three. The lowest bracket effectively exempts the first $3,200 of taxable income from taxation. The middle bracket imposes a 3 percent tax on the next $12,840 of taxable income, and all taxable income in excess of $16,040 is taxed at 6.5 percent—down from 7 percent. Beginning in tax year 2023, the top marginal rate will decrease by 0.1 percentage point each year until it reaches 6 percent in tax year 2027.

Initiative 31 could retroactively reduce the state’s corporate income tax rate from 4.55 percent to 4.40 percent, in parallel with an individual income tax rate reduction, if approved by voters in the upcoming November election.

Under H0436, the state reduced its flat corporate income tax rate from 6.5 to 6 percent. The change is retroactive to January 1, 2022.

Using revenue triggers as part of HF 2317, the state’s corporate income tax rate will begin to decrease from the current top marginal rate of 9.8 percent to as low as 5.5 percent. The magnitude of each rate cut will be contingent on corporate income tax collections. Each year, rates will be adjusted to those that would have been necessary to collect no more than $700 million in the preceding year. Given that FY 2022 net collections are projected at $780 million, Iowa starts with the capacity to cut approximately 1 percentage point from each of its current three corporate income tax brackets. The first reductions will go into effect at the beginning of calendar year 2023.

With enactment of HB 3418, Oklahoma became the first state in the nation to make full expensing of large capital investments by C corporations permanent at the state level. Many states allow corporations to fully invest capital investments as part of the state’s conformity to the Tax Cuts and Jobs Act of 2017. However, that federal provision is set to begin phasing out at the beginning of 2023.

Enactment of HB 2106 will permanently exempt groceries from the state’s 6.5 percent sales tax. Grocery purchases will be taxed at 4 percent in 2023, 2 percent in 2024, and will be completely exempted as of 2025.

The state enacted a budget, HB4700, that suspends the state’s 1 percent sales tax on groceries for fiscal year 2023, which began July 1.

The fiscal year 2023 budget includes a provision that will suspend the state’s 4 percent sales tax on groceries for 30 days beginning August 1.

The state enacted HB 5501 on March 24, which suspended the state’s 25-cent motor vehicle fuels tax from April 1 until July 1.

HB 7071 included a provision to suspend the state’s 25.3 cents per gallon fuel tax for the month of October.

The state delayed until January 2023 its annual inflation adjustment to the gas tax that would have increased the tax by 2 cents per gallon on July 1, as required by a 2019 state law that doubled the gas tax and indexed it to inflation.

The enacted state budget (S. 8009) includes a provision to suspend the state’s sales tax and motor fuel excise tax from purchases of gasoline and diesel until the end of the calendar year.

As part of HB 5501, policymakers enacted a one-week sales tax holiday applicable to clothing and shoes that cost $100 or less. The holiday took effect April 10 and was in addition to the annual back-to-school tax holiday that occurs in August.

Under HB 163, New Mexico enacted a permanent reduction to the state’s very broad-based, hybrid sales tax (known within the state as a gross receipts tax). The tax will be reduced by one-quarter of a percentage point, from 5.125 to 4.875 percent, over two years (5.0 percent as of July 1, 2022; 4.875 percent as of July 1, 2023). The law also includes a tax deduction for certain professional services sold to manufacturers, which was intended to reduce gross receipts tax pyramiding by approximately $5 million per year.

Due to a tax revenue surplus that exceeded the Taxpayer Bill of Rights (TABOR) cap by more than $1 billion, single tax filers will receive a $750 tax rebate in August. Joint filers are eligible for $1,500.

With the ratification of HB360, the Delaware Department of Finance will issue a one-time $300 tax rebate throughout the summer to every adult resident of the state.

HB 304 contains a provision that issues tax rebates of up to $250 for single filers or $500 per household.

As part of H0436, Idaho issued one-time rebate checks of 12 percent of a filer’s tax year 2020 individual income tax liability, or $75 per taxpayer and dependent, whichever was greater.

Under provisions of S1087, eligible South Carolinians can receive a tax rebate ranging from $100 to $800. Refunds begin at $100 for filers with a 2021 tax liability of $100 and grow proportionately with the liability up to a maximum of $800.

The fiscal year 2023 state budget, HB 30, includes a provision that authorizes a tax rebate of up to $250 for individual filers and up to $500 for joint filers, provided the filers had a tax liability of at least that amount in 2021.

Although 14 state legislatures remain in session or have been called into special session, much—though not all—of the year’s work on tax reform is likely behind us. Last year was a remarkable year for state tax relief and tax reform, and legislation enacted thus far this year has 2022 closely following 2021’s pattern. The large revenue increases most states have experienced in recent years have proved fertile soil for rate reductions and structural reform, and the enhanced mobility facilitated by the pandemic has increased the role of tax competition, further nudging states in that direction.

While recession fears may slow the pace of revenue-negative tax reform in particular in 2023, there remains an important role for both state tax relief and, just as importantly, structural state tax reform, which can be revenue neutral while still enhancing a state’s overall competitiveness. In particular, reforms which reduce the cost of capital investment can help address the supply chain crisis and put states’ economies on a firmer footing.

Here’s what the Federal Reserve’s third 75 basis point interest rate hike means for you
Costco Sees Volatile Trade After Earnings
56% of Americans think the U.S. is already in a recession. These 4 steps can help protect your finances in a downturn
Perform internal corporate governance audits to better manage enterprise risks
These 7 Trump properties are at the center of New York’s fraud lawsuit