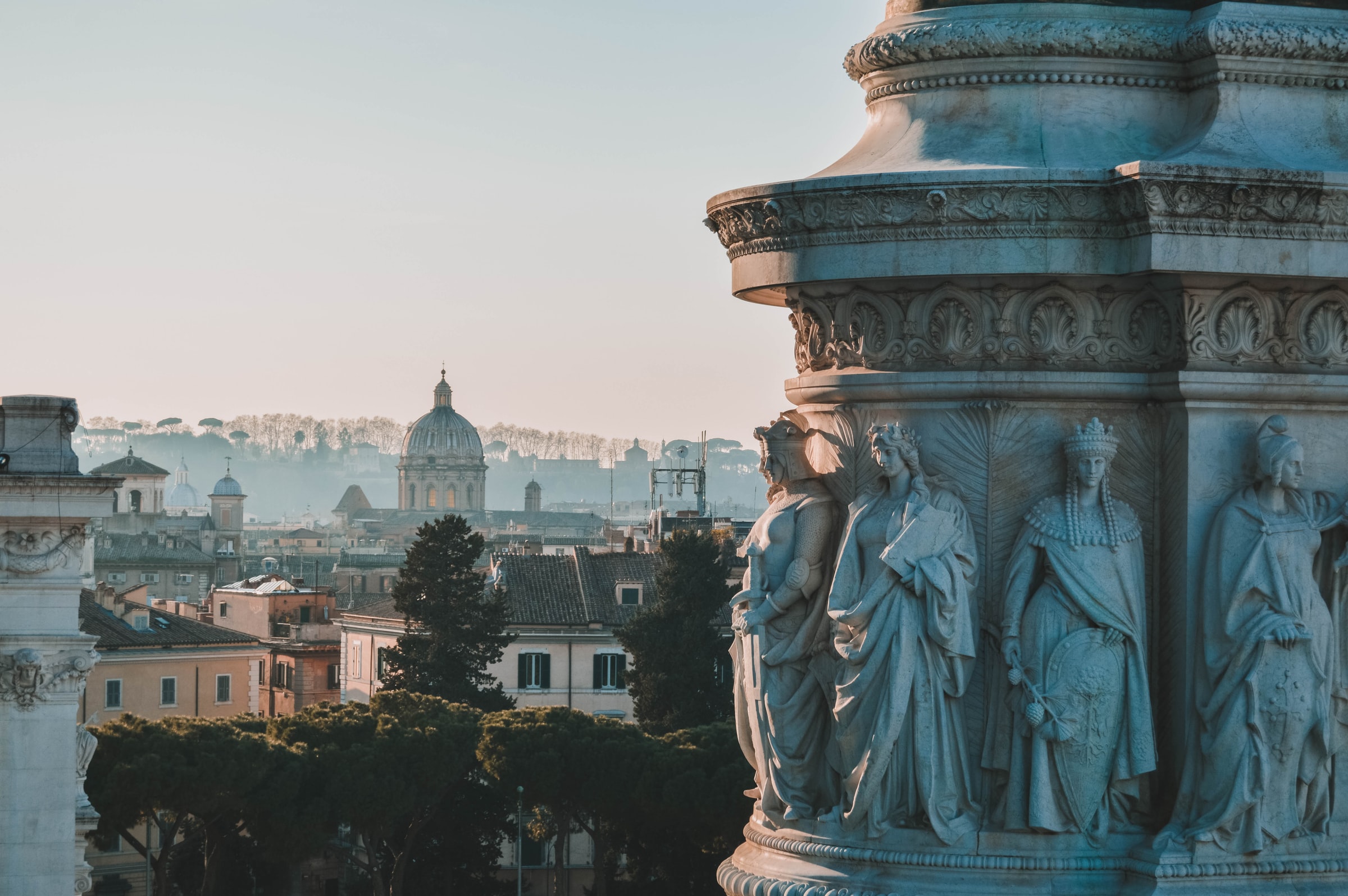 Imagine a worker who gets a raise and ends up paying more in tax than their raise. This is the case for an Italian worker who earns just above the average wage. With an increase in pay of just EUR 448, he would face a 116 percent marginal tax rate. Therefore, despite the pay increase, this Italian worker will face a net loss and see his earnings cut by EUR 72.

This is why the marginal tax wedge is relevant for understanding how workers might benefit (or not) from an increase in pay once taxes enter the picture.

High marginal tax rates like the one observed in the case of this Italian worker act as barriers to upward mobility, discouraging people from advancing in their careers. Very often these high rates are hidden in complex tax structures. However, a recently published study by Archbridge Institute and Tax Foundation highlights the underlying policies that drive the marginal tax rate spikes that workers are subject to in a number of countries.

In 2021, while moving above the average wage, this Italian worker with no children living in Rome faced a marginal tax wedge of 116 percent for a 1 percent increase in gross earnings on top of the gross annual wage of EUR 38,456. The marginal tax rate spike occurred at 113 percent of the average wage and approximately 128 percent of the median wage. Therefore, this Italian worker faced the so-called “middle-income trap” where marginal tax rates are higher than 100 percent. This is because the local income tax rate rises drastically at this level of income. 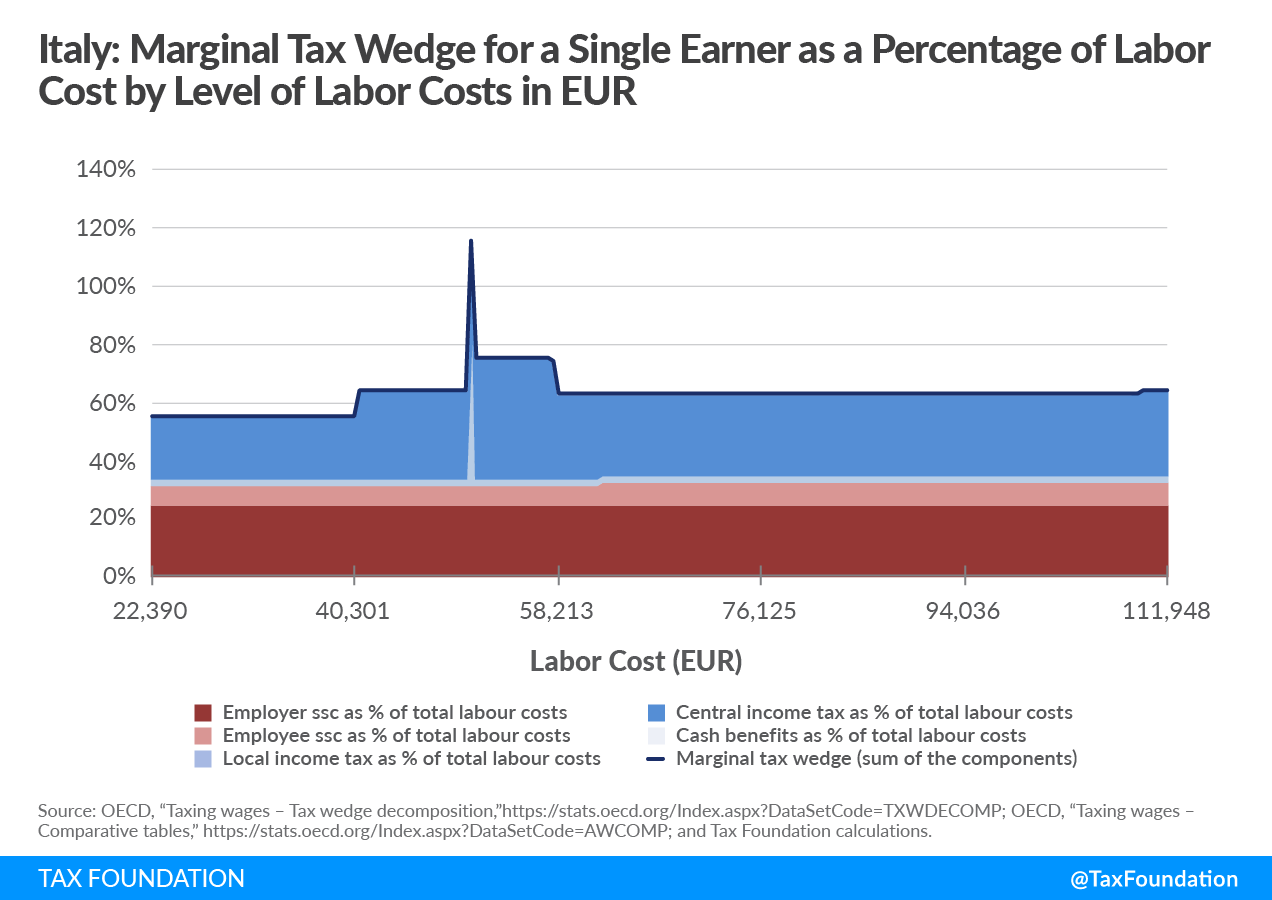 In order to understand this “middle-income trap” an overview of how the tax wedge in Italy works is needed. The tax wedge is formed by social security contributions and central, regional, and local income tax.

The regional income surtax rates range between 1.23 percent and 3.33 percent. In some regions, the surtax is progressive with different tax brackets where the increased tax rate applies to the overall income instead of the corresponding bracket excess. For this reason, within a limited range of income, an increase in the gross income translates into a lower disposable income, creating the so-called “poverty trap.”

On the other hand, the local income surtax has, in general, a flat tax rate that can range, depending on the city, between 0.2 percent and 0.9 percent for incomes over EUR 12,000. This is especially problematic for low-income earners as one additional unit of income on top of the exemption threshold will create a local tax liability on the overall income, not only on the additional amount. In the case of a worker that moves from earning EUR 12,000 to EUR 12,001, depending on his residence, he might face a local tax liability of EUR 108. Therefore, the marginal tax rate will be larger than 100 percent.

Lazio, the region where Rome is, for which the marginal tax wedge was determined by the Organisation for Economic Co-operation and Development (OECD), applies a progressive income tax with five tax brackets and tax rates that go from 1.73 percent to 3.33 percent. Nevertheless, for taxable income under the EUR 35,000 threshold, a 1.73 percent tax rate applies to the whole amount of taxable income. Additionally, Rome also applies a local income tax rate of 0.9 percent.

Italy could follow the example of Finland where both central and local income taxes operate together. However, in Finland, the local income tax and the central income tax are adjusted and well-coordinated and do not generate marginal tax rate spikes like the ones described in Italy. Nevertheless, marginal tax rates above 50 percent, as the ones observed both in Italy and Finland, might discourage employment and labor supply. Even if marginal rates do not spike in a way that trap people in poverty, high marginal rates still impact workers directly. 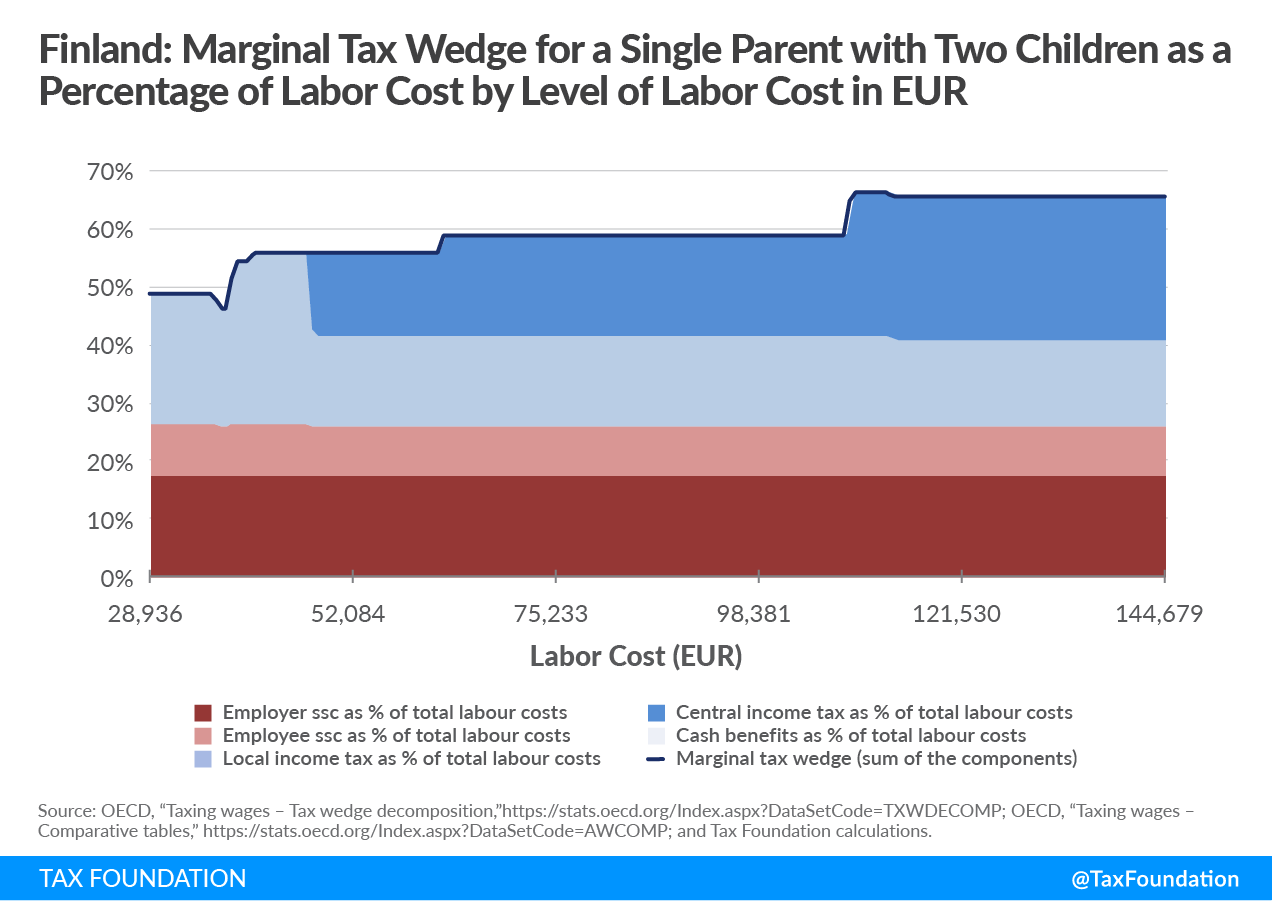 Financing regions and municipalities through income surtaxes can create, as in the case of Italy, complex tax structures contributing to high marginal tax rates and “income traps.” When planning to reform the Italian tax system, policymakers might want to consider aligning the regional and local income tax rates and thresholds with the central income tax. Eliminating this “middle-income trap” would likely encourage the upward mobility of the Italian average-income workers.