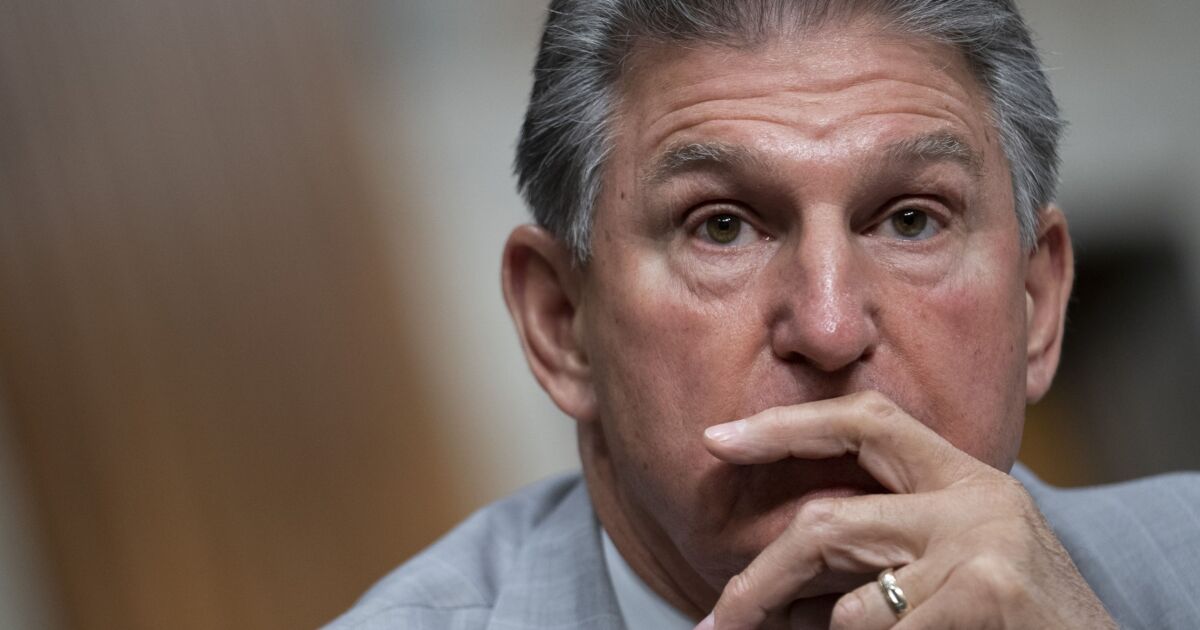 Senator Joe Manchin said he put the brakes on the Democrats’ tax and climate agenda in order to wait for July inflation data and to see what the Federal Reserve does next — but is willing to consider moving ahead in September.

The West Virginia Democrat said Friday that he told Senate Majority Leader Chuck Schumer he wouldn’t agree to go forward with an economic package that includes tax and climate provisions before an August congressional recess.

“I said, Chuck, can we just wait until the inflation figures come out in July,” Manchin said on “Talkline with Hoppy Kercheval” on West Virginia broadcast station MetroNews. “He took that as no, I guess.”

Manchin said parts of the package he’d be willing to consider in the meantime include provisions lowering prescription-drug prices and extending enhanced Affordable Care Act subsidies.

The July consumer price index report is scheduled for release Aug. 10, and a consensus estimate for it isn’t yet available. But the median forecast of economists surveyed by Bloomberg for the third quarter is currently 8.1%, suggesting continued historically high readings for July through September. The CPI surged 9.1% in June.

As for the Federal Reserve, policy makers are likely to raise interest rates by at least 75 basis points on July 27. Bets on a bigger move, of a full percentage point, retreated on Friday after a gauge of consumers’ longer-term inflation expectations dropped in July.

Sept. 30 is the hard deadline for Democrats to use the fast-track budget process to try to ram a bill with climate, tax, prescription-drug and other measures through the Senate without Republican support. Pushing action closer to the November midterm election would likely make it harder to pass any controversial tax increases through the narrowly controlled House.

Democrats now need to weigh whether to move forward now with a prescription drug and Obamacare health bill, using their one shot with the current budget reconciliation process for fiscal 2022, or wait to see if Manchin comes back to the table in September for a larger bill.

Some states announce Affordable Care Act premium increases in mid-August. If nothing is done, voters would be hit with bigger bills in October, just before the November election.

A spokesman for Schumer didn’t immediately respond to a request for comment.

Just days ago, Manchin and Schumer were negotiating over hundreds of billions in spending on measures designed to fight climate change, including tax breaks for renewable energy, electric vehicles and other clean-power sources. The loss of those plans will be a bitter pill for many Democrats on Capitol Hill and at the White House.

Dropping the climate package, which at one point contained a historic $555 billion sum for clean power, electric vehicles and resilience to global warming, would represent a major setback in the Biden administration’s efforts to confront emissions. The president pledged last year that the U.S. would cut its greenhouse-gas emissions 50% to 52% from 2005 levels by the end of the decade.

Manchin in his radio interview insisted that while he and Schumer were far apart on the climate and energy portion two or three months ago, they were making significant progress more recently, saying that “as far as I’m concerned we’ve had good conversations.”

Meanwhile, Manchin’s comments leave in question whether Republicans will continue to block work on a separate bill aimed at boosting US competition against China, particularly in the technology sector.

Senate GOP leader Mitch McConnell has said that legislation, which includes $52 billion in incentives for US semiconductor manufacturing, wouldn’t go forward if Democrats insist on passing their longer-term economic package on a party-line vote. Republican aides said Friday morning that no decisions had been made yet.

Top Democrats were also weighing their next move. House Speaker Nancy Pelosi said she would confer with Schumer.

“I would of course be disappointed if the whole saving-the-planet is out of the bill,” Pelosi said.

Focusing on Wealth Inequality Is Counterproductive
Acuity Brands Trades Higher After Earnings Beat
IRS wants input on energy guidance
This ‘wild card’ strategy offers retirees a fix for unpaid quarterly taxes. Here’s how to use it
TreasuryDirect sold more than $27 billion in Series I bonds since Nov. 1. Now it’s getting a makeover