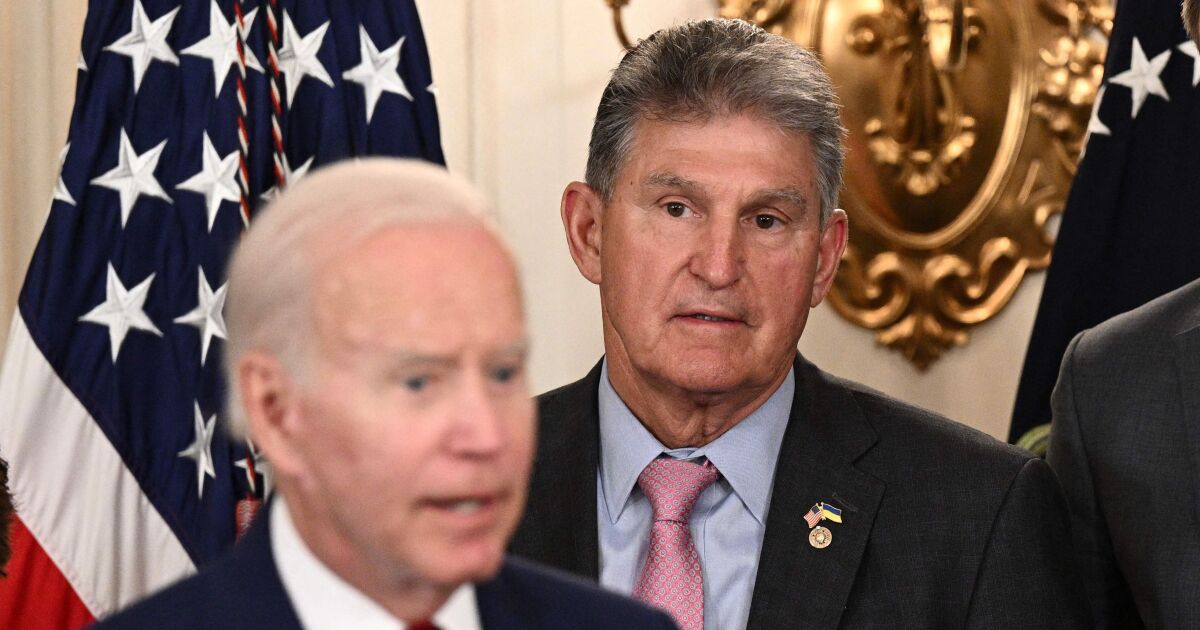 Democrat Joe Manchin is once again playing spoiler for President Joe Biden’s economic agenda, bringing it to a screeching halt even after spending much of the year whittling down its grandest ambitions.

The West Virginia senator said Friday it wouldn’t be “prudent” to act now on climate and tax plans crafted to get his support without seeing another month of inflation data first.

His decision to slam the brakes on a plan he had been negotiating with Senate Majority Leader Chuck Schumer came almost seven months to the day after he torpedoed the much larger Build Back Better bill. Like then, he’s infuriated many of his fellow Democrats. But he knows his state, which is heavily dependent on fossil fuels and gave Donald Trump 68% of the presidential vote in 2020.

In the 50-50 Senate, Manchin’s vote is make-or-break for Democrats. He’s effectively given them a choice: Agree to what he’s willing to vote for now — a prescription drug pricing package tied to a two-year extension of Affordable Care Act subsidies — or gamble that they can win him over in September before the special rules allowing Democrats to bypass a GOP filibuster expire at the end of the month.

He said he’d be willing to reconsider then, after the inflation data for July is released and the Federal Reserve acts on interest rates at its next meeting. And he earlier expressed his frustration that leaders in Washington haven’t heeded his warnings about inflation until now.

But it’s not at all clear that he’ll be ready to move forward then or that Democrats can get it finished even if he does.

Manchin denies he’s scuttling the package that he and Schumer have been negotiating for weeks.

While Manchin provided the key vote to pass Biden’s massive pandemic rescue package last year, since then he and the 50 Senate Republicans have blocked the bulk of Biden’s agenda.

Manchin, and to a lesser extent fellow Democratic Senator Kyrsten Sinema of Arizona, have emerged as the key checks on Biden. He has occasionally tanked Biden nominations, like Federal Reserve pick Sarah Bloom Raskin over her advocacy for the Fed to act on climate, and he’s long complained about the Biden administration’s efforts to squeeze fossil fuels.

He had been pushing the administration to agree to open up more federal lands to oil and gas exploration, accelerate permitting, and approve the Mountain Valley Pipeline for natural gas from his state to Virginia, particularly in the wake of Russia’s invasion of Ukraine.

And last year, he was nearly alone in his party in repeatedly blasting the Fed’s decisions to continue its emergency bond-buying programs even as inflation pressures were building.

The start-and-stop negotiations have been a recurring feature of Biden’s and Democratic leaders’ dealings with Manchin. That’s made him a focus of anger within his party in Congress, particularly progressives who hail from safe Democratic states and districts.

“Senator Manchin has said a lot of things, and what he makes clear over and over again is that he can’t close a deal and you can’t trust what he says,” Washington Representative Pramila Jayapal, head of the Congressional Progressive Caucus, said Friday.

Jayapal, unlike some other progressives, has been relatively mild in criticism of Manchin in the past. But she said Democrats’ control of Congress is at stake in the November midterm election.

“We are going to have to get two more real Democrats who will help to pass the president’s agenda, not obstruct it,” she said, referring to the races for the Senate.

“You’ve got one person who is trying to dictate policy for the entire country and that’s a shame,” he said.

But Manchin also has pulled the rug out — at least for now — from one of the Republicans’ chief lines of attack. With Biden’s approval ratings plummeting as inflation spikes, and recession fears rising, the politics of voting for a tax increase of any kind to subsidize green energy projects has become more problematic.

“I want to make sure we’re not harming our economy,” he said.

Republicans led by Senate Minority Leader Mitch McConnell had made clear they planned to run against vulnerable Democrats on the message that they had spent the country into inflation and now wanted to tax it into a recession.

“Doing this would be political suicide for them,” the No. 2 GOP Senator, John Thune, told reporters Thursday.

In the meantime, some Democrats were already pushing Biden to pivot to executive actions and regulations on climate after a year of trying to get Manchin to agree to a package.

Senator Sheldon Whitehouse urged the Biden administration to dramatically ramp up its executive actions on climate, including imposing carbon tariffs on imports at the border using existing authorities rather than wait for legislation.