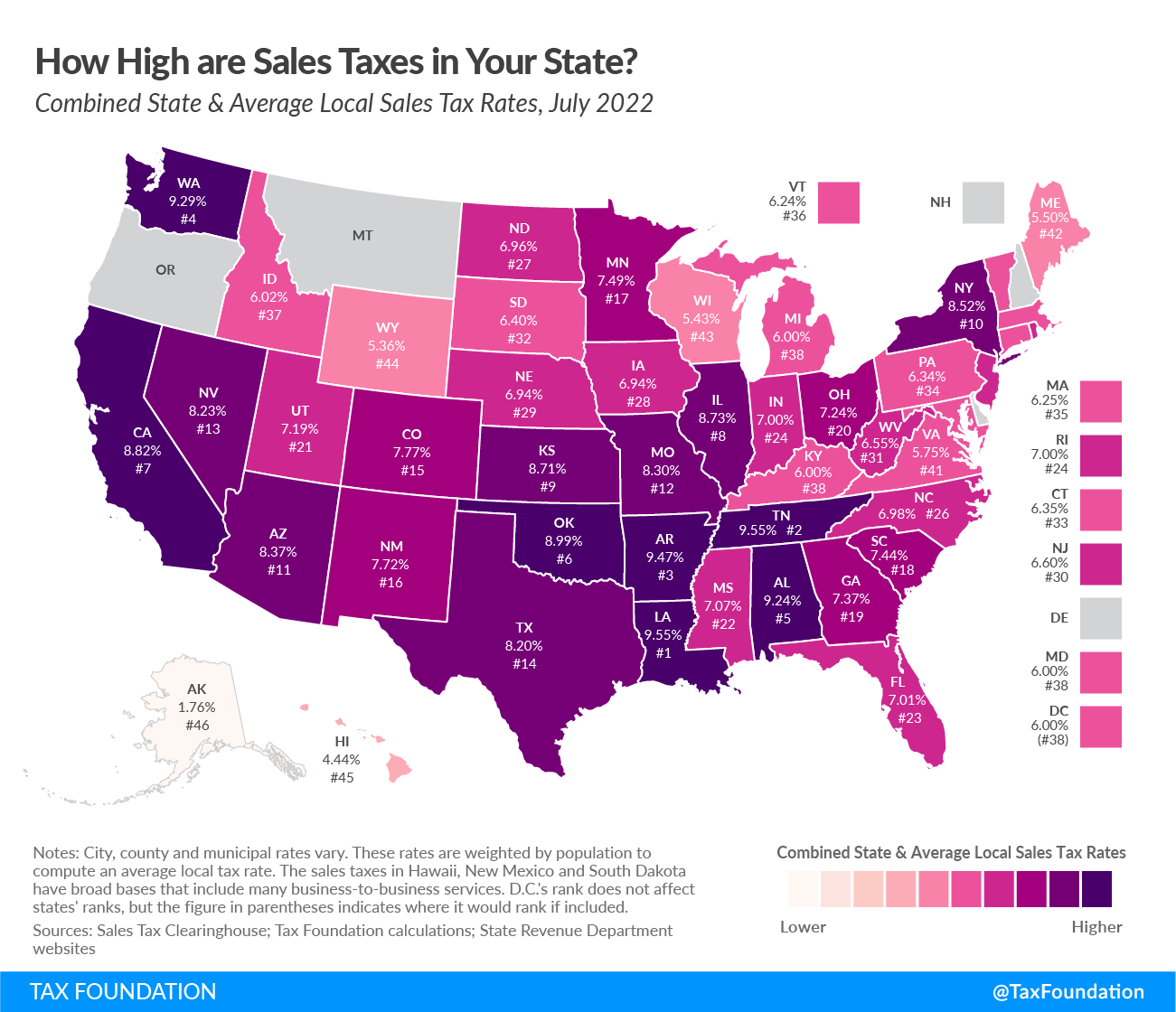 Retail sales taxes are one of the more transparent ways to collect tax revenue. While graduated income tax rates and brackets are complex and confusing to many taxpayers, sales taxes are easier to understand; consumers can see their tax burden printed directly on their receipts.

New Mexico lowered the rate of its state-level sales tax—a hybrid tax the state refers to as its gross receipts tax—on July 1, moving its combined rates from 15th to 16th highest and displacing Colorado. [4] The rate dropped from 5.125 percent to 5.00 percent, with a further reduction to 4.875 scheduled for July 1, 2023. Notably, if the revenue from the gross receipts tax in any single fiscal year from 2026 to 2029 is less than 95 percent of the previous year’s revenue, then the rate will return to 5.125 percent on the following July 1.

In an unusually quiet year on the sales tax front, no states saw ranking shifts due to local rate changes since January. West Virginia’s towns of Alderson and Ansted adopted local option sales taxes of 1 percent beginning on July 1, but this was not enough to change the state’s ranking.[7] Robust receipts and ample federal pandemic relief funds have likely reduced pressure on localities to generate additional tax revenue.

It must be noted that some cities in New Jersey are in “Urban Enterprise Zones,” where qualifying sellers may collect and remit at half the 6.625 percent statewide sales tax rate (3.3125 percent), a policy designed to help local retailers compete with neighboring Delaware, which forgoes a sales tax. We represent this anomaly as a negative 0.03 percent statewide average local rate (adjusting for population as described in the methodology section below), and the combined rate reflects this subtraction. Despite the slightly favorable impact on the overall rate, this lower rate represents an implicit acknowledgment by New Jersey officials that their 6.625 percent statewide rate is uncompetitive with neighboring Delaware, which has no sales tax.

The Role of Competition in Setting Sales Tax Rate

Avoidance of sales tax is most likely to occur in areas where there is a significant difference between jurisdictions’ rates. Research indicates that consumers can and do leave high-tax areas to make major purchases in low-tax areas, such as from cities to suburbs.[8] For example, evidence suggests that Chicago-area consumers make major purchases in surrounding suburbs or online to avoid Chicago’s 10.25 percent sales tax rate.[9]

At the statewide level, businesses sometimes locate just outside the borders of high sales-tax areas to avoid being subjected to their rates. A stark example of this occurs in New England, where even though I-91 runs up the Vermont side of the Connecticut River, many more retail establishments choose to locate on the New Hampshire side to avoid sales taxes. One study shows that per capita sales in border counties in sales tax-free New Hampshire have tripled since the late 1950s, while per capita sales in border counties in Vermont have remained stagnant.[10] At one time, Delaware actually used its highway welcome sign to remind motorists that Delaware is the “Home of Tax-Free Shopping.”[11]

State and local governments should be cautious about raising rates too high relative to their neighbors because doing so will yield less revenue than expected or, in extreme cases, revenue losses despite the higher tax rate.

Sales Tax Bases: The Other Half of the Equation

This report ranks states based on tax rates and does not account for differences in tax bases (e.g., the structure of sales taxes, defining what is taxable and nontaxable). States can vary greatly in this regard. For instance, most states exempt groceries from the sales tax, others tax groceries at a limited rate, and still others tax groceries at the same rate as all other products.[12] Some states exempt clothing or tax it at a reduced rate.[13]

Tax experts generally recommend that sales taxes apply to all final retail sales of goods and services but not intermediate business-to-business transactions in the production chain. These recommendations would result in a tax system that is not only broad-based but also “right-sized,” applying once and only once to each product the market produces.[14] Despite agreement in theory, the application of most state sales taxes is far from this ideal.[15]

Sales Tax Clearinghouse publishes quarterly sales tax data at the state, county, and city levels by ZIP code. We weight these numbers according to Census 2010 population figures to give a sense of the prevalence of sales tax rates in a particular state.

It is worth noting that population numbers are only published at the ZIP code level every 10 years by the U.S. Census Bureau, and that editions of this calculation published before July 1, 2011, do not utilize ZIP code data and are thus not strictly comparable. ZIP code level data for the 2020 Census is not yet available, so the current edition continues to use 2010 Census numbers.

It should also be noted that while the Census Bureau reports population data using a five-digit identifier that looks much like a ZIP code, this is actually what is called a ZIP Code Tabulation Area (ZCTA), which attempts to create a geographical area associated with a given ZIP code. This is done because a surprisingly large number of ZIP codes do not actually have any residents. For example, the National Press Building in Washington, D.C., has its own ZIP code solely for postal reasons.

For our purposes, ZIP codes that do not have a corresponding ZCTA population figure are omitted from calculations. These omissions result in some amount of inexactitude but overall do not have a palpable effect on resultant averages because proximate ZIP code areas which do have ZCTA population numbers capture the tax rate of those jurisdictions.

Sales taxes are just one part of an overall tax structure and should be considered in context. For example, Tennessee has high sales taxes but no income tax, whereas Oregon has no sales tax but high-income taxes. While many factors influence business location and investment decisions, sales taxes are something within policymakers’ control that can have immediate impacts.

[1] Special taxes in Montana’s resort areas are not included in our analysis.

[2] This number includes mandatory add-on taxes which are collected by the state but distributed to local governments. Because of this, some sources will describe California’s sales tax as 6.0 percent. A similar situation exists in Utah and Virginia.

[3] The sales taxes in Hawaii and South Dakota have bases that include many services and so are not strictly comparable to other sales taxes.

[13] Liz Malm and Richard Borean, “How Does Your State Sales Tax See That Blue and Black (or White and Gold) Dress?” Tax Foundation, Feb. 27, 2015, http://taxfoundation.org/blog/how-does-your-state-sales-tax-see-blue-and-black-or-white-and-gold-dress.