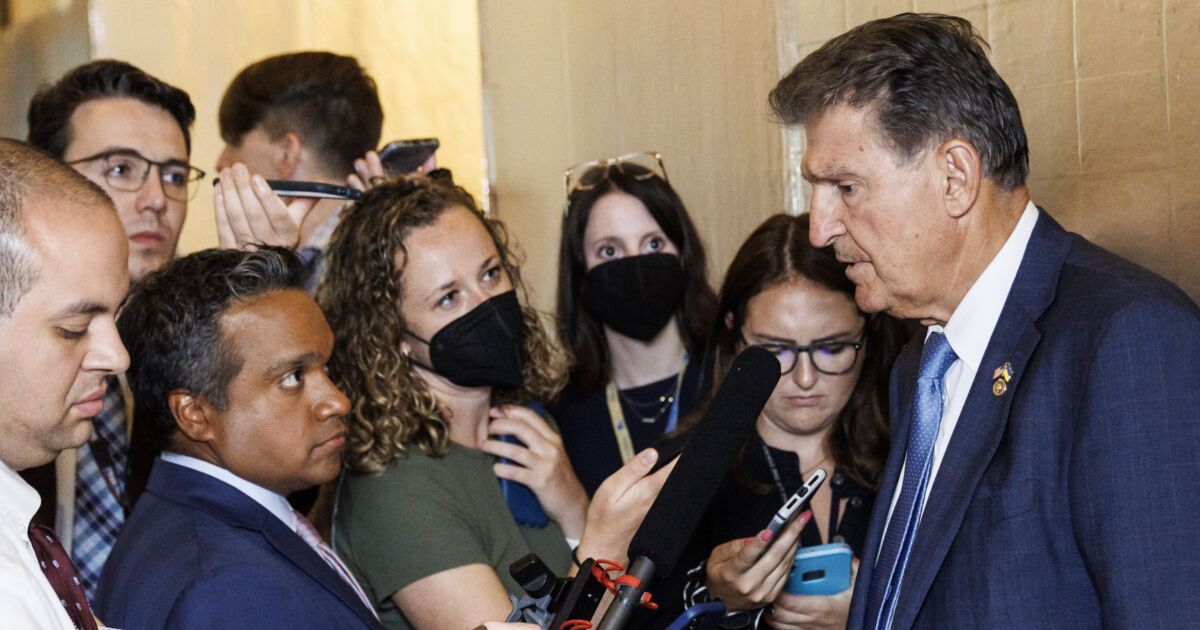 The Senate passed a landmark tax, climate and health-care bill, speeding a slimmed-down version of President Joe Biden’s domestic agenda on a path to becoming law after a year of Democratic infighting that the White House was unable to control.

The vote on the bill was 51 Democrats in favor to 50 Republicans against, with Vice President Kamala Harris casting the tie-breaking vote after an overnight marathon of votes on amendments. It now goes to the House, where the Democratic majority is expected to pass it on Friday.

Democrats called the bill the largest investment in fighting climate change ever made in the US, and it’s projected to help cut greenhouse gas emissions by about 40% from 2005 levels by the end of the decade. They applauded and hugged during the vote on final passage.

“I told my caucus all along, including the most pro environmental people, that we’re going to have to swallow some bad stuff to get good stuff,” Senate Majority Leader Chuck Schumer said after the vote. “But my North star was always 40% reduction in the amount of carbon going into the atmosphere.”

The legislation also aims to prevent large corporations from exploiting tax breaks to pay little if any tax, and it would allow Medicare to negotiate drug prices for the first time. It’s forecast to make the first substantial cut to budget deficits in more than 10 years.

Biden applauded Senate Democrats for pushing it through to passage.

“It required many compromises. Doing important things almost always does,” Biden said in a statement hailing the vote.

Republicans, united in opposition, argued it wouldn’t stop the historic levels of inflation and would impose taxes that could tip the U.S. economy into recession.

Senate GOP leader Mitch McConnell argued that “hundreds of billions of dollars in tax hikes during a recession will kill jobs.”

The Senate vote was the culmination of a year and half of intra-party squabbling among Democrats about the scope of the bill, which Biden had once hoped would be so sweeping as to rival Franklin Delano Roosevelt’s New Deal. In the end it came down to two holdout moderate Democrats, Senators Joe Manchin and Kyrsten Sinema, whose votes were essential in the 50-50 Senate and who balked at both larger tax increases and more spending. Biden negotiated with Manchin and Sinema in the early goings, but the deal that revived the bill was entirely hammered out on Capitol Hill.

The legislation was passed through reconciliation, a Senate procedure that exempts certain tax and spending measures from a filibuster and requires only a simple majority to pass.

Trimmed from its original $6 trillion price tag to one of around $437 billion, the bill will nonetheless be a cornerstone achievement of Biden’s first term and one Democrats are eager to campaign on before the November midterms where they are fighting to retain control of Congress.

Key elements of the legislation:

The tax increases are noteworthy for who isn’t affected. Democrats and Biden ran on reversing former President Donald Trump’s 2017 tax cuts, including the corporate rate, which remain untouched. High earners, including millionaires and billionaires, won’t face higher taxes, either.
Sinema demanded that the bill retain the carried interest tax break for private equity. That request irked many of her fellow Democrats who say there is little justification to provide tax benefits to highly paid investment managers.

The bill also doesn’t address two key priorities for many Democrats: implementing a 15% global minimum tax deal that Treasury Secretary Janet Yellen negotiated with nearly 140 countries last year and increasing the $10,000 cap on the state and local tax deduction, or SALT. With Democrats likely to lose a majority in at least one chamber of Congress next year, it’s unclear if either proposal can pass.

Still, Democrats indicated they were satisfied with the outcome. Schumer said the party has been talking about lowering drug prices and curbing climate change for years to little avail.

‘Billions of dollars get left behind’: The 401(k) industry now has a ‘lost and found’ for your old retirement accounts
Activist Jana prepares to bring star nominees to Freshpet’s board. Here’s how it may create value
Best Portable Generators That Save You in a Pinch
Best & Worst Performing ETFs of Q3 2022
Best Commercial Utility Cart Options for Your Business