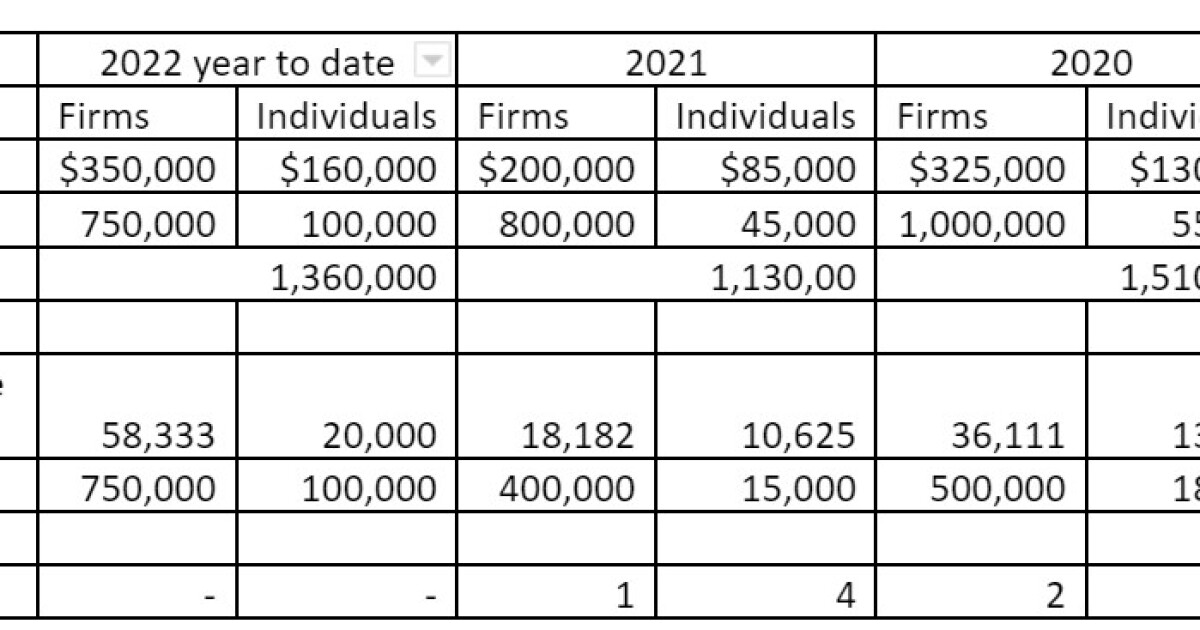 The Public Company Accounting Oversight Board is on pace for a record-setting year for civil monetary penalties. Through July 31, 2022, the PCAOB has levied penalties against registered accounting firms and individuals totaling $1.36 million. While this figure does not appear significant in comparison to other regulatory agencies’ reporting metrics, it is significant for the PCAOB, which has signaled it is ramping up financial penalties in enforcement settlements. At this rate, 2022 penalties will eclipse annual penalties levied in 2019, 2020 and 2021.

In a July 28, 2022 speech to the Council of Institutional Investors, PCAOB Chair Erica Williams stated that strengthening the PCAOB enforcement activity is one of the board’s three key focus areas. She noted the board has “more than doubled [its] average penalties against individuals compared to the last five years” and that the board has “increased [its] average penalties against firms by more than 65%.” She also indicated that all 2022 settled cases have included financial penalties.

Financial penalties are only one of many sanctions available to the board. The board can prohibit a registered firm from accepting PCAOB engagements, require the firm to undertake certain remedial actions, temporarily suspend or permanently bar individuals from working on or holding certain roles on issuer engagements, and requiring individuals to take relevant continuing professional education. Revoking a firm’s registration is the most severe nonfinancial penalty the board can impose as it permanently eliminates a firm’s revenue stream from issuer engagements.

Note: For the six instances in the data included above in which a single fine was attributed to both a non-affiliated firm and an individual within that firm, the table divides the fee equally between the firm and the individual.

The increase in financial penalties is likely due to the change in the composition of the PCAOB board that took place in late 2021 under the Biden administration. With the exception of Duane DesParte, who became a board member in April 2018, board members were appointed in November 2021. In her comments to the Council of Institutional Investors, Chair Williams stated she was “an enforcement lawyer at heart.”

The PCAOB has been criticized for doling out paltry penalties. An analysis published by the Project On Government Oversight in September 2019 indicated only $6.5 million in fines were levied against the Big Four accounting firms during the PCAOB’s first 16 years. POGO also found individuals at U.S Big Four firms were fined only $410,000 during that same period — a sum POGO indicated was less than a single partner’s annual earnings at a Big Four firm.

Compared to its counterpart in the United Kingdom, even the increased financial penalties in 2022 are nominal. On July 28, 2022, the Financial Reporting Council published an enforcement review disclosing record financial sanctions of £46.5 million over the last year.

Here’s why protecting Social Security may be a consensus issue for key group of women voters in the midterm elections
How to Build Credit for Your Business
These are the best ways to give to charity for the ‘vast majority of people.’ Here’s how to pick the most tax-efficient strategy
Top Wall Street analysts name the best stocks to ride a market downcycle
IRS updates per diem rates for business travelers for 2022-2023