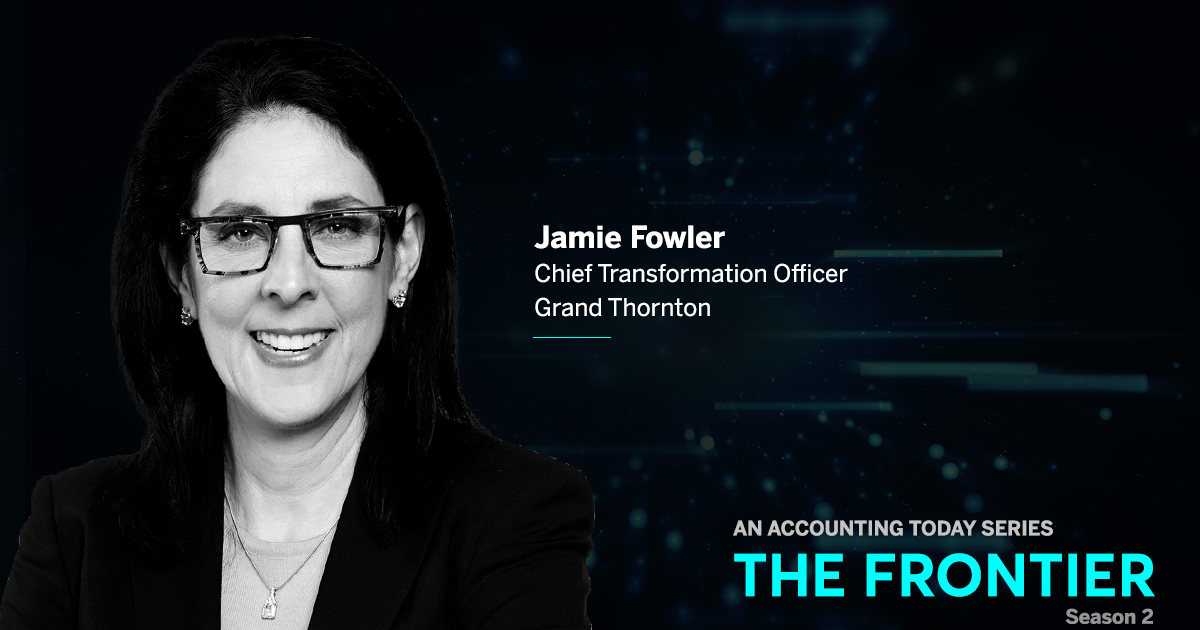 Jamie Fowler, Grant Thornton’s chief transformation officer, says that, “In some ways, I think, all technologies are oversold when it comes to accountants.” While at first this may seem an odd thing coming from a major firm technology leader, Fowler was making a point about not putting the cart before the horse and forgetting that, ultimately, the tech serves the accountant, not the other way around.

“The secret sauce here is not the technology but the wisdom about our clients, as well as the knowledge of the regulatory natures of our business — that’s the thing that’s scarce. And so I think we really should, as accountants, see our knowledge and our access to clients as the more valuable thing, and the technology is only one more thing towards making an impact on our clients and in our work,” she said.

Fowler said a mindset she has observed among certain accountants is that their skills as a professional — their knowledge of standards and regulations, their ability to manage clients, being capable of making business insights — is something separate from their technology skills. This is a fallacy, according to Fowler: The use of technology to solve business problems should be seen as part of the accountant’s overall skillset of being able to find solutions for their client. Oftentimes, especially today, this involves technology, but only as one part.

Part of people’s difficulty in overcoming this mindset, she believes, comes from a mistaken idea that they have to be experts in everything to be able to offer anything, which is absolutely not the case. An accountant, she said, already comes in with the permission to meet their clients where they are with their business problem, as well as the permission and expectation that this could involve technological solutions brought alongside the accounting ones. There is no expectation that they will be a master of everything, whether accounting or technology.

“I think many accountants separate the two in their mind. They’re still very broadly focused on just the regulatory knowledge piece, but not so much on the technology piece, or their mistaken understanding that they have to absolutely know both to the Nth degree,” she said.

This is connected with a larger problem she has observed over the past few years, which is a mindset that the answers to people’s problems lie solely in technology, and that people can essentially do a set-it-and-forget-it installation of the proper applications so they never have to think of these problems again.

“[They think] once it’s applied they won’t have to think of whether the process was broken to begin with, whether they should have rethought the entire problem and whether this was even the most important problem they had. ‘Should I have prioritized differently?’ Sometimes there’s a lot of business acumen and knowledge and judgment that, in many cases, we’re tempted to set aside because there’s an app for that and, you know, that doesn’t really get to the root of the problem,” she said.

These are the kinds of questions that accountants have been trained to ask, and should not be afraid of asking when dealing with a client. Because, depending on the nature of the problem, more advanced technology may in fact not be the answer. It’s important, she said, to make sure a solution fits the problem at hand and is appropriate for the specific client.

“You can have a real fancy car, but if what you’re doing is hauling hay five days a week, you ought to be in a pickup,” she said. “That hay will really mess up [the fancy car’s] back seat.”

Fowler said she has observed software developers that market to the accounting profession are starting to understand these things as well, which she feels will eventually lead to better software.

“I think developers are quickly gaining an understanding that their technology and tools aren’t the whole fix; they require knowledge and the client’s understanding and the business acumen of the accountant to solve a real business problem. So it’s the combination of the two in tandem that I believe they’re getting to understand, that they need to work together,” she said.

This is good because as time goes on and things become more complex, there will be greater need for technological solutions. While it is vital that accountants maintain a holistic mindset that examines tech in the context of the larger business problem, she acknowledged that the majority of those problems will likely involve at least some technology.

“I think almost anything in this world from this point forward can be aided with technology. Any business problem. I’m trying to think of one that wouldn’t and I’m struggling to see where it wouldn’t. So that applies with your clients but it also includes in the running of the business, whether it’s a one-person or 100,000-person business. There is no end to the ramping up of solutions,” she said.

This story is part of the second season of the Accounting Today series called “The Frontier,” where we explore the cutting edge of accounting technology through conversations with thought leaders across the country, who will share with us their observations, hopes, concerns and even a few predictions here and there.

See the rest of the series here.

As BlockFi files for bankruptcy, what to know about crypto investor protections
It’s been a volatile year for the market: These are the key things to know before rebalancing your portfolio
How the Inflation Reduction Act and Pillar Two Could Shape the Future of EU Competitiveness
JinkoSolar (JKS) and C.H. Robinson Worldwide (CHRW): 12/1/2022 Bull and Bear
32 Last Minute Christmas Gifts for Employees, Co-Workers, Clients and Your Boss